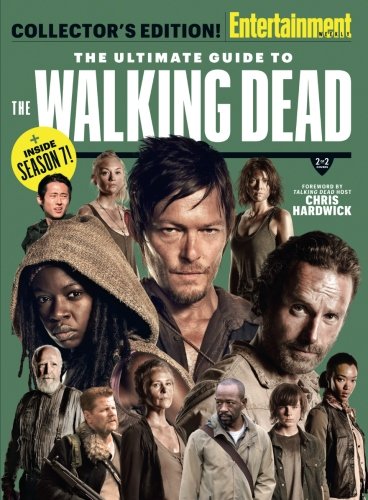 Walking Deadheads. Either you are one or you know one. Now in its seventh season, “The Walking Dead” has gone from cult hit to cultural movement and has now achieved the status of appointment television. Mostly because of one simple word – community: This is a show about a tight community made by a tight community for a tight community, and part of its simple appeal is that it makes us face the most basic questions about who we’d become in an extreme world, and who would be there with us.

Now, in an all-new collector’s edition, Entertainment Weekly takes readers into the writing room, behind the scenes and onto the sets in The Ultimate Guide to The Walking Dead. Go inside each season with exclusive photographs, interviews with the cast and crew, a season-by-season recap, as well as original art that traces the journey of survivors in the series, created by the artists who draw The Walking Dead comic books. Additionally, this collector’s edition has two front covers, one of the living, and one of the undead (you should probably collect them both!).

With exclusive insights into season 7, special sidebars, as well as an original essay on Why We Love Zombies, The Ultimate Guide to The Walking Dead is the drop un-dead companion to one of the hottest shows on television today.